The substitution of the implant and abutment for their analogs in mechanical studies: In vitro and in silico analysis

A less costly methodology for evaluate implant-supported crowns is proposed.
It is suggested the substitution of the implant or abutment for their analogs.
The outcomes of fracture load are not influenced by these replacements.

The use of analogs could reduce the cost of mechanical tests involving implant-supported crowns, but it is unclear if it would negatively affect the data accuracy. This study evaluated the substitution of the implant by implants analogs or abutment analogs as a support for crowns in mechanical tests, taking into account stress distribution and fracture load of monolithic lithium disilicate crowns. Thirty lithium disilicate monolithic crowns were randomized into three groups according to the set: Implant + abutment (IA); implant analog + abutment (IAA); abutment analog (AA). The specimens were subjected to mechanical fatigue (106 cycles, 200 N, 2 Hz) and thermal fatigue (104 cycles, 5°–55 °C). A final compression load was applied and the maximum fracture load was recorded. Data were analyzed using one-way ANOVA (? = 0.05). The experiment was validated by finite element analysis and the maximum principal stress was recorded. No statistically significant difference was observed in the mean fracture load among groups (P > 0.05). The failure mode was similar for all groups with the origin of crack propagation located at the load point application. Finite element analysis showed similar stress distribution and stress peak values for all groups. The use of implant’s or abutment’s analog does not influence the fracture load and stress distribution for cemented implant-supported crowns. 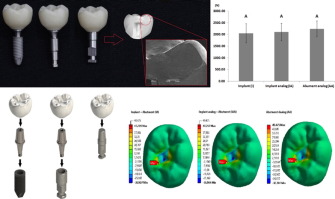 Microbiological Sealing Analysis of a Tapered Connection and External Hexagon...

Is There a Need for Standardization of Tightening Force Used to Connect the T...